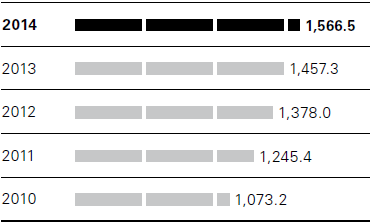 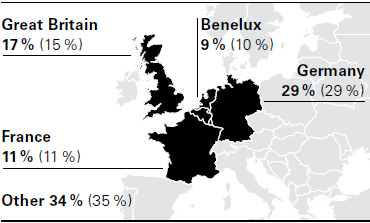 Sales in Europe including the Middle East and Africa increased in fiscal year 2014 in both local currencies and in the reporting currency by 7% to EUR 1.567 million (2013: EUR 1.457 million).

In the past fiscal year, sales in the Group’s own retail business in Europe rose 14% to EUR 851 million (2013: EUR 747 million). This is equivalent to an increase of 13% in local currencies. In addition to continued selling space expansion, this favorable performance was particularly due to the heightened productivity of existing retail selling space. Sales with customers in the wholesale channel increased in both local currencies and the reporting currency by 1% to EUR 716 million (2013: EUR 710 million). This development was caused in particular by the upturn in the order business in the second half of the year.

In Southern Europe, HUGO BOSS was able to generate sales growth in fiscal year 2014 in both Italy and the Iberian Peninsula. Double-digit growth rates in the Group’s own retail business and in the wholesale channel led to a significant rise in sales, particularly on the Iberian Peninsula.

1 Due to the reallocation of certain cost centers between corporate units and Europe, certain amounts shown here do not correspond to the figures reported in prior years.

Improved segment profit in Europe thanks to higher gross profit

The segment profit for Europe came to EUR 536 million, up 9% year on year (2013: EUR 490 million). The gross profit margin rose as a result of the growth in the Group’s own retail business and lower discounts in this channel. The higher selling and marketing expenses were offset by the increase in gross profit. At 34.2%, the adjusted EBITDA margin was up 60 basis points on the prior year (2013: 33.6%).