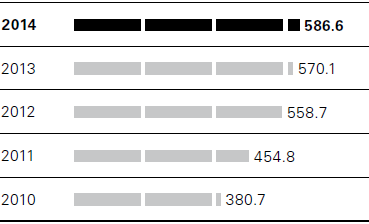 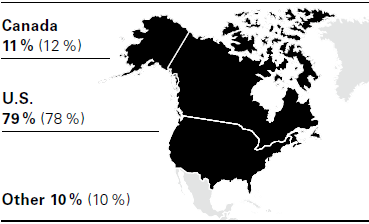 In the Americas sales in the Group’s reporting currency increased by 3% year on year to EUR 587 million (2013: EUR 570 million). In local currencies, this corresponds to sales growth of 4%.

In fiscal year 2014, sales in the Group’s own retail business rose by 11%, reaching EUR 326 million (2013: EUR 293 million). This is equivalent to an increase of 13% adjusted for currency effects. Spurred by the continued expansion in this channel, all the region’s markets contributed to this development with double-digit sales growth. Sales of EUR 261 million were generated in the wholesale channel in the same period (2013: EUR 277 million). Accordingly, sales in this distribution channel decreased by 6% in the Group currency and by 5% in local currencies. In the United States in particular, the takeovers of selling space previously managed by wholesale partners completed in fiscal year 2013 resulted in a shift in sales from wholesale business to the Group’s own retail business.

Segment profit for the Americas slightly short of prior-year level

The segment profit for the Americas came to EUR 151 million, 1% down on the prior-year level (2013: EUR 152 million). The improved gross profit margin was offset by an increase in selling and marketing expenses due to expansion of the Group’s own retail activities. The adjusted EBITDA margin for the region, at 25.8%, was 90 basis points below that of the prior year (2013: 26.7%).